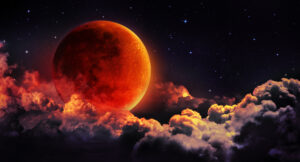 The Lunar Eclipse occurs in early morning hours on November 8, marking the last full lunar eclipse until 2025. The moon will turn blood red as the moon passes through the earth’s shadow. (A lunar eclipse accompanies the Full Moon.) The Full Moon and Lunar Eclipse deliver dramatic, passionate, emotional energy for the next two weeks. Eclipses involve an exchange of energy–endings, beginnings, and transformation.

The forecast is challenging with many squares (tension) and oppositions (two contrasting/conflicting energies). Over the past few years, we’ve passed through difficult astrological transitions, and the message continually focuses on pursuing peace within the inner self, which is a refuge from chaotic change. On a positive note, Moon and Mars will align with the Pleiades on the night of the eclipse. According to Native American lore, the Pleiades are known as the seven sisters who help with the care of the earth and transmit spiritual knowledge.

Sun (life), Mercury (thought), and Venus (love) are in Scorpio, a water sign representing the scorpion, the eagle, and the phoenix—or seeing life from the earth level, the sky, and transcending limitations as a mystical beast. Scorpio energy heightens intuitive abilities, emotions, and sometimes the strangeness in life.

Moon (emotions) in Taurus, an earth sign, is practical, stable, and interested in the outer world. Moon opposes Mercury (thought) interferes with emotional/physical balance and harmony. Logic and emotions are at odds, and we move between the two, often without finding practical answers. Moon opposition Venus (love) increases the need for appreciation and affection.

Moon conjunct Uranus (sudden change, quantum field) is a volatile aspect, igniting impulsive actions and rebellion. With this aspect, the challenge lies in observing erratic, impulsive emotions while focusing on stability and grounding. (Emotions are not always real; they come and go like waves.) Moon conjunct North Node asks for a clear look at the future through the quiet voice of intuition—and to overcome the fleeting nature of negative moods, emotions, and feelings.

Mercury (thought, communications) sits in Scorpio, activating the ability to unravel mysteries and to look deeply at patterns, situations, and other people. It heightens perception and depth of the mind. Mercury conjunct Venus helps with communication of love through words, bringing openness and clarity of expression.

Venus (love, partnerships) in Scorpio is passionate, jealous, and emotional. Venus trine Jupiter (expansion, good luck) is a very special aspect, increasing our ability to see the potential in life and offering expansion of relationships, work, and creative processes.

Squares with Sun/Moon/Mercury/Venus and Saturn

Squares with Saturn (limitation, karma) ask for strength, commitment, and hard work. They often feel frustrating, accompanied by tests of resolve and character.

Sun, Mercury, and Venus Opposite Uranus

The energy of Uranus tends to feel erratic and impulsive, and it prefers the new to the old. It’s important to stay grounded and clear.

Trines with Neptune are positive, increasing intuitive and creative ability.

Jupiter (good fortune, expansion) is retrograde in Pisces, which creates creativity, optimism, and connection. It allows connection of spiritual tools and realizations; it connects us in a sea of emotion. Mystical aspects include Jupiter conjunct Neptune (illusion, mysticism), which gives awareness of the unity and light—and Jupiter sextile Pluto (subconscious, transformation), which aligns us with our inner power.

Saturn (limitation, karma) in Aquarius squares Uranus (sudden change) in Taurus, and it speaks of conflicts and divisive feelings between opposing groups. It may also apply to opposing energy of the electronic world and the natural world.

← Zero Point Message from the Wolves →