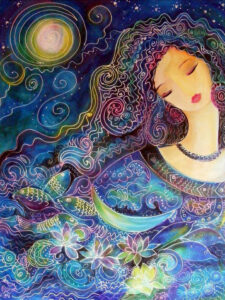 “Goddess of Water” by Ronnie Picard

A space exists between every heartbeat; it makes an appearance between the inhale and exhale of the breath. It is also the space between human consciousness and divine consciousness. In simple terms, it is known as the void. Greg Braden refers to it as zero point, and it is called the Great Mystery in the Tao te Ching.

It is a point of reception with the quantum field or the light. In one moment, our meditation or visualization takes on a new flavor. Or the light suddenly illuminates the woods on a drive or walk. Sometimes, we feel it as a response, a feeling of certain knowing, or a strong indication to travel in a direction. Native Americans felt it as a response from the Great Spirit. Many have referred to it as “being in the light”—a state of grace, relaxation, and peace.

Others refer to it as the sacred space in the heart, the point lying behind/within the heart chakra. In this place, duality lies in perfect balance—a resolution occurring from being at one while embracing “the mystery.” Part of the quest of spirituality is merging with the pivotal balance of the hidden heart space because impossible answers and endless possibilities are found in this realm.

The importance of the void lies in the element of transformation.  Modern numerology refers to the void as the number 13, the feminine completion of a cycle following twelve steps of transformation and accomplishment in the physical/spiritual realm. The thirteenth step involves moving into the nothingness (which is also a “something”) to find an ending to the last of a cycle and a new beginning simultaneously.

I mention it because we pass through the void with New Moon and the Eclipse with a strange mixture of ending and beginning energies. An intention to move into the void or to stay connected to the heart space is helpful—but finding and creating in the void is an entirely different experience. Change usually comes quite rapidly and is rarely exactly what we envision. It can be better, strange, or even pull in another life or reality in a matter of hours, days, or weeks.

The mystical state is somehow closest to quantum physics when everything changes its pattern according to our input, beliefs, and energy. It involves surrendering to light by letting go and feeling into the divine blueprint. Perhaps, we feel it or absorb it, but it ignites an entirely distinct, original flow of energy.

No one can tell anyone how to find the void or the flow of energy, issuing from it. We can tell of our own experiences, describe the feeling, or how we get there. We can hint and share clues. But it is the place of incredible change and manifestation for those who truly want to “get there.” 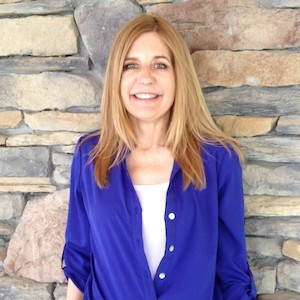